We need to talk. Something has been on my mind and I haven’t said anything yet, but as the founder of this charity, it’s time for me to speak.

What’s been on my mind is the ‘Black Lives Matter’ movement, the protests and the anti protests. As an Aboriginal woman I have suffered discrimination and seen my Mother, family and loved ones be reduced and treated as nothing but lesser inferior humans, animals even, because of the colour of their skin. This has affected me my entire life in ways that would take me months to write and you weeks to read.

I walk both worlds. I’m what my people might call a ‘white walker.’ Meaning I identify as a proud Aboriginal woman but because of my skin I can pass for a white woman. This means I’m like a fly on the wall sometimes. People don’t know I’m Indigenous until I tell them.

Because of this I’ve grown up hearing the most vile, cruel and degrading comments made about my people by others who didn’t know who or what I was. They thought no one was listening. I thought they were friends.

They’d make these cruel comments and laugh. Thinking it was funny and thinking it didn’t matter because those they were mocking couldn’t hear them.

But they could hear them. Because I could. And I heard it all. And if they did eventually realise I’d be asked, “But you’re not offended are you? You’re one of the good ones !” It left me wondering what a ‘good one’ was, and why I was one. It left me trying to make them feel better.

And I knew I couldn’t help her.

When my Mother was little her Father was arrested and thrown in jail. His crime? He was caught having a beer with his own Father, in his own home. Back then Aboriginal people had to get a license. Their white peoples license. This gave them the permission to do things white people did. Like drink alcohol.

Back then my mothers grandfather had come to live with them because he was dying. He wanted to be with his family, so my Grandparents made room for him and he came to live his last days in their home.

That night Great Grandfather was shipped off to hospital and my Mothers family were never allowed to see him again.

It was during this time the welfare came. They told my grandparents that if any of my Grandfathers family set foot in the house again or associated with them all of my grandparents children would be removed forever.

When my mother was little she lived on a beach in tents with her extended family. Aunties, uncles, cousins. They all lived together at 11 mile beach near Esperance WA. She tells me she went to school one day but when she returned home all of her cousins had been removed. There was chaos. All of the children were gone and taken to missions hundreds of miles away. Mother and Fathers wailed and cried but they knew they were powerless to do anything. The children were removed because they were black. Nothing more.

They were black. Aboriginal. Boongs, coons Abos. How could these people possibly know how to raise children? The government knew better and without warning ripped all of the children away.

Why was my mother and her 7 siblings not taken? Their Mother was a white woman, and no government was ever going to remove well fed loved children from a white woman. That cruelty was reserved for the blacks. The darkies.

So from that day on, to save his children from being removed and placed in the care of welfare my Grandfather had to disown his own family. From that day on my Mother and her siblings were told they must never ever mention they were Aboriginal. If anyone asked about the colour of their skin or where they were from they were to say they were Italian or any other race. Anything but Aboriginal.

This taught my Mother to be so ashamed and fearful of who she was. Mum told me she once had a friend joining her at home for lunch on a school day ask who that the black man she saw outside her house? Mum was ashamed to tell her and instead said he was the gardner. To this very day Mum is wracked with guilt that she erased her fathers identity out of shame and fear her friend would find out she was Aboriginal.

It didn’t matter. The friend realised it was Mums Dad and as soon as they got back to school she stood on the top steps of Perth Girls high school and screamed at the top of her lungs “Jenny Williams is a BOONG!”

Years passed and my mother met and married my Dad. They had five children. I am the youngest surviving child. When I was three we moved across to Canberra. Far away from family and kin.

When I grew up we never spoke of who we were. My mother was too ashamed to tell us. It was only when I was seven and a group of Aboriginal performers came to our school that I found out who I was. After they performed I rushed up to them and hugged them. There was something so familiar about them. I didn’t know what it was. I’d never met them but I knew that I ‘knew’ them. The teachers quickly ushered me back to class.

When I got home that day I excitedly told my Mum what had happened. I wanted to know who these men were and why I felt so excited to see them and felt like I knew them. It was as though I was seeing someone I’d missed for a very long time finally come back into my life.

That’s when she told me who I was. These men were Aboriginal men and I, like her was also Aboriginal. I was too young at the time to understand the enormity of what had happened but I knew in my heart that I belonged to them, though it was as long time before I could find out more. My Mother was still too ashamed to speak of it.

When I was older, about 12, we moved across the country back to our homeland in WA and I got to spend time with all of my Aunts and Uncles and Cousins. One of my Uncles is a very respected Elder in the Aboriginal community. He was a lot older than my Mother and left home when she was still young so was able to learn our ways and traditions.

Uncle helped me understand who I was. He taught me the ways and the meanings of our people. He spoke to me about ancient traditions passed down from elders before. Things my mother was never able to learn or speak of.

My uncle taught me not to be afraid who I was and to nurture and accept the spiritual gifts I was given. He taught me of the Dreamtime and the Dreaming. He altered my life’s course forever. Back to the path it should always have been on.

This story has many other chapters but I will leave those for another time.

My reason for sharing all of this is to help people understand what is lost when we erase culture and tradition from our First Nations people. It’s so much more than people realise. My Mother still lives in shame. She will die never fully being able to be who she is.

Had it not been for my uncle I would not have nurtured my gifts which have helped hundreds of people and continue to do so.

I needed to share the back story so people would understand this movement is so much more than stopping name calling.

I like so many others am exhausted from the fight. We’re fierce but we’re tired. We need to hand over the baton for a bit and without other people standing up there’s no one to hand that baton to.

For those of who you understand or want to learn more. I thank you. My people thank you. There is so much work to do.

Thank you for fighting for us and with us.

Dedicated to my Mother who gave me life and kept her head up despite the pain. And to Uncle, who taught me how to find the way back home.

Sun Jul 5 , 2020
Thankfully most of the tower residents will be able to leave their homes as of July 10. As we move forward we will now be assisting single parent families who are unable to access sanitary items, formula and nappies during the six week stage 3 lockdown. We will be working with local community groups to drop these items directly to the families who are unable to safely access them themselves. Thank you so very much to everyone who has helped us achieve this incredible work. 🙏🙏🙏🙏🙏🙏🙏🙏🙏🙏🙏🙏🙏🙏🙏🙏 As many of you know there are over 3000 people locked in 9 towers […] 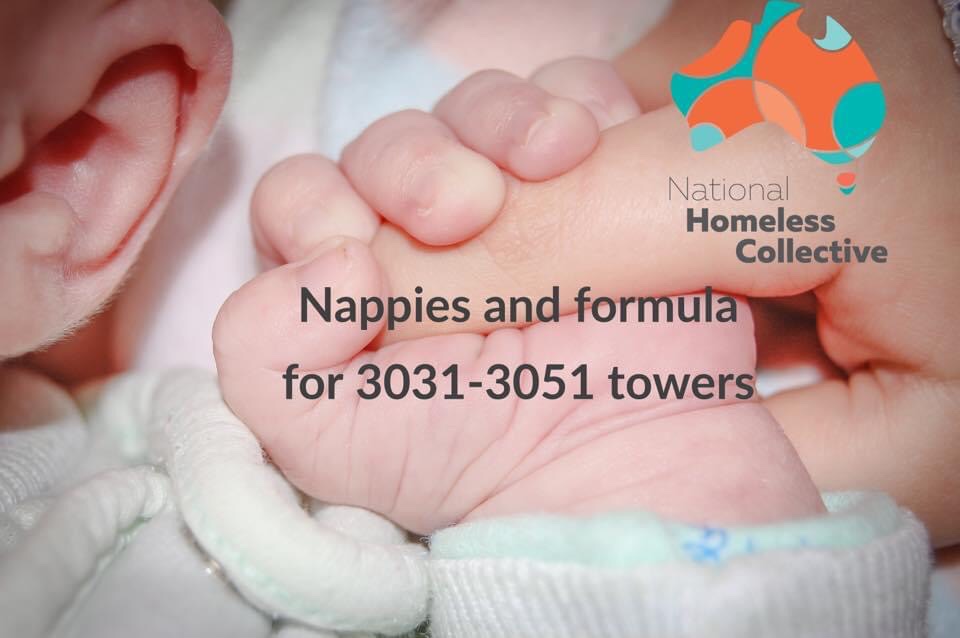